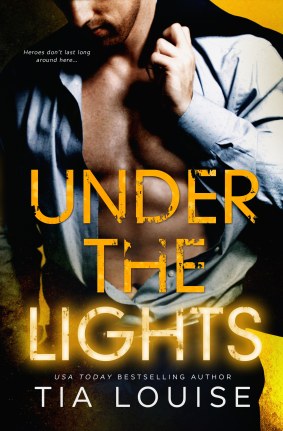 UNDER THE LIGHTS
Book #1

Fall in love with the sexiest girl in New Orleans?
Check.

Prepare to die for her?
Double-check.

Larissa Hale is the most beautiful woman I’ve ever seen.
She’s the rising star of the Pussycat Angels, the hottest burlesque show in the French Quarter.

She’s the Dark Angel who stole my heart.
Her body is intoxicating, our love overwhelming.

Cat eyes and blood red lips.
Sizzling lips on white-hot skin.
I couldn’t keep my hands off her…

But her fame had a dark side,
A sinister shadow lurking under the lights. Get UNDER THE LIGHTS Now:
Amazon US | Amazon Intl | Paperback

BOOK #1: Under the Lights by Tia Louise

Chapter 1: “Survival is an inside job.” -Anonymous

The first thing I see is the gun on the floor.

Fear tightens my neck, and I’m frozen in the doorway. My backpack slides from my shoulder down my arm as ice trickles down into my veins. The room smells like the fourth of July, firecrackers mixed with the musty odor of smoke and damp.

The air barely moves in New Orleans at this time of year.

“Uncle Rick?” My voice is low and even.

My closest relative, a man I barely know, is hunched in the fetal position on the couch. Eyes closed, both his hands are between his knees, and his lips have disappeared between his teeth.

He could be sleeping, napping while watching a television show. Only the screen is black, and he’s not responding.

Fuck. The ice in my veins melts into panic. My eyes dart around the room assessing the scene. Drawers open. Papers spread across the hardwood floor. The corner of the rug is curled under… Signs of a struggle?

I should slowly leave the room, go downstairs, and call 911 to report a crime.

I swallow the fear and pick my way forward, across the small apartment to where my few possessions are stashed. I’ve been in here less than a week, long enough to grow suspicious of his late-night errands, the jerk of surprise when the phone rings after hours, the presence of a .44 Magnum at the dinner table.

Uncle Rick was annoyed when I showed up on his doorstep last week, looking for a place to crash. My plan was to come here, study hard, and get into the police academy.

“You can crash until you’ve found a place to live,” he growled. “By the end of the week.”

He was my father’s only sibling, and I’d taken a gamble coming here. Then, when he found out my plans, he was even more pissed.

Or he’d say I was “part of the problem.”

“I want to fight crime, find men like the ones who ruined my dad and bring them to justice,” I’d say.

I want to be a hero.

He said I was a fool.

My eyes fix on the handgun on the floor. Don’t touch anything.

Covering my hand with my sleeve, I open the closet door and scoop my few hanging clothes off the rack. A fatigue-green army-surplus bag is in the corner. I shove my extra pair of boots, shirts, underwear… everything I brought with me in it, then I do my best to retrace my steps to the door…

UNDER THE STARS
Book #2

All around us was darkness and night…

I’m not a hero. I’m a survivor.
I had one way out, and I took it.
Now all I want is peace,
A place to pick up the pieces and start over.

But she wants justice.
Names on a list, strangers in the crowd.
I vowed to help her, but helping her brings us face to face with the demons.

Until Mark appears.
I thought he died in the fight.
I was wrong.

The boy I loved is now the man we have to fear the most.
When he tried to save me, he had no power.

Now he carries a gun, and he won’t stop until I’m his.

Get UNDER THE STARS Now:
Amazon US | Amazon Int’l | Paperback

Tia Louise is the Amazon and International Bestselling author of the ONE TO HOLD and DIRTY PLAYERS series and co-author of the Top 10 Amazon bestseller The Last Guy.

From “Readers’ Choice” nominations, to picking up USA Today “Happily Ever After” nods, to winning the 2015 “Favorite Erotica Author” and the 2014 “Lady Boner Award” (LOL!), nothing makes her happier than communicating with fans and weaving new tales into the Alexander-Knight world of stories.

Mermaid, Good Witch, and bonafide Beach Bum, Louise is a former journalist living in the center of the USA with her lovely family and one grumpy cat. There, she dreams up stories she hopes are engaging, hot, and sexy, and that cause readers rethink common public locations…