Lady Luck, a sexy, Sci-Fi Romantic standalone, and the fourth book in the Harem Station series by JA Huss writing as KC Cross is NOW LIVE!! 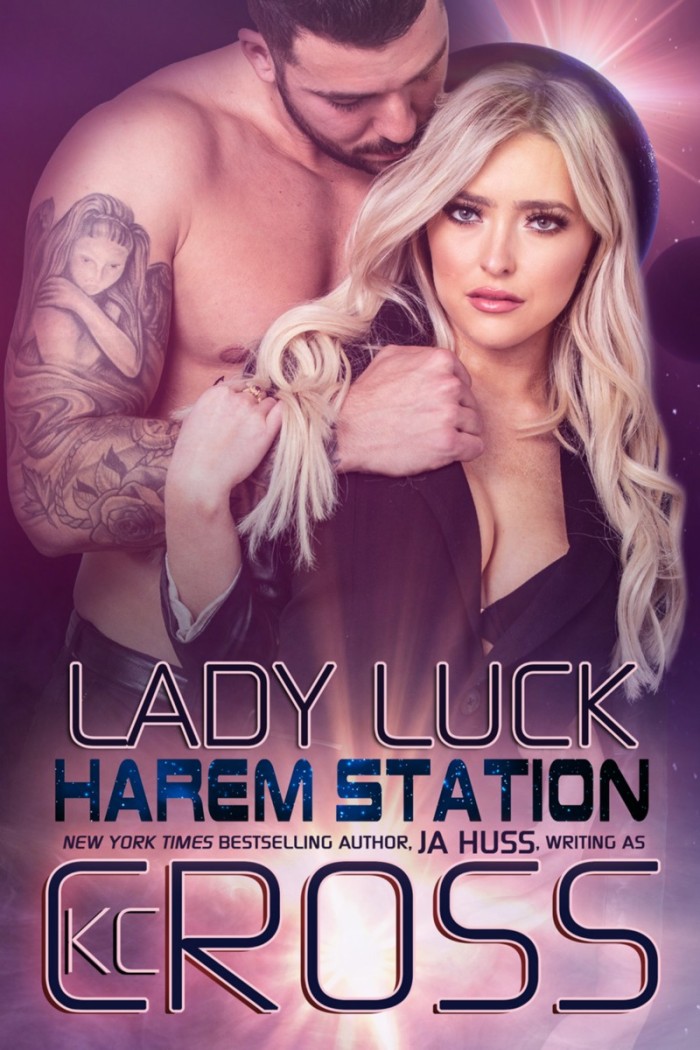 And two. There was a good chance she was his soul mate.

Nyleena is what you might call feisty. Or sassy. Or maybe just… feral. She is wild. Much too wild for Luck’s taste. But now that he’s home there’s no way to deny it.

Lucky for him, all Cygnian Princesses have one true weakness. They cannot resist cooking up crazy plans to tackle unsolvable problems. And he’s going to use that irresistible urge to tame her savage spirit.

Nyleena has plans of her own and none of them involve Luck. She is out for blood. All the people who made her life hell will be dealt with, and she’s going to find every single one of them and take them out.

Right after she solves this one last unsolvable problem… how not to fall in love with your soul mate.

Lady Luck is a sexy, hate-fuck of a story about a wild, savage princess, six hot brothers trying to tame her, bad relationship advice from killer sexbots, your favorite evil, but misunderstood, dragonbee bot, and a repentant AI trapped in a sex prison with a succubus. The only thing I hate more about Luck than the fact that we’re forced to fuck every day to keep our sanity is his lack of dirty talk.

He refuses to talk to me or let me talk to him.

That makes me ragey. Because dirty talk is my favorite and he won’t engage.

But one of these days…

He slaps his hand over my mouth and the rage that was only imaginary two seconds ago manifests in all its glorious reality when I wrap my legs around his middle and squeeze him so tight with my thighs, he gasps.

He glares at me, momentarily distracted. And I use that distraction to my advantage by twisting my body and flipping him over so he’s on his back.

He’s still inside me, the heads of both his cocks swollen in place. Locking us together until we come and relieve the lust hidden deep inside our genetically-matched souls.

My tits bounce on his chest and he grabs my hair, shoots me a warning glare.

I know what that glare says. Don’t make me bleed, Nyleena.

He shoots this look at me every time, and every time I take it as a challenge.

I raise my hand up.

But I do it anyway.

I swipe my nails right down the side of his cheek and hiss at him like a feral cat.

He wraps his muscled arms around my upper body, squeezing me tight as he pulls me down on to his chest.

I’ll admit, Luck is strong. And when he gets me in a lock like this, there’s no way I can escape until he lets me.

But I don’t make it easy.

I squirm and twist in his grip. All the while his hips are thrusting up with powerful force. So hard that his balls are slapping against my clit.

This momentarily takes my mind off the forced submission and I float a little.

“Come,” he commands again, growling out the word in my ear. “Right. Fucking—”

The light locked up inside me pulses out in flickering waves at first. And then it stops just as his cocks contract inside me. My luminous flux holds steady for a moment so when his contractions are over, and his sperm is ready to explode into me, my flux knows what to do and it bursts into fractals of geometrically-shaped light that dance and crackle around our bodies. Electrifying them like charged ions flowing out from a sun on a matrix of deep, dark space-time.

He throws me over to the side, his cocks slipping out of me, dripping with our shared release, and breathes hard and heavy.

I lie there with eyes closed. Not caring that he just literally threw me away.

Because this is the best part.

I wait for him to tuck his dicks away, mumble out, “Thank you,” as he walks off and leaves me alone.

And then… I let out the last of my climax.

Because I never give him all of me.

I have one little hidden, secret surprise that he will never know about.

I open my eyes and come for real. Silver-laced lavender light shoots up and out, bouncing off the UV reflectors above the grass and flowers, and comes back down to blanket my body, and this entire secret garden, in a soft, purple glow.

And all the plants around me grow ten times taller from my sexy, lust-filled, nutritious light. Get the complete series here!